Wentworth (/ˈwɛntwɜːrθ/, locally /ˈwɛnɾwɜːrθ/), officially Wentworth Metropolis (abbreviated as WE), is a metropolitan prefecture and the capital and most populous city of Enderron. It is bordered by Janszoon Prefecture to the west and south. Located in central Enderron, the metropolis sits on a narrow isthmus bounded by Castlebrook Bay to the south, the Andesite Mountains to the west and Hounslow Bay to the northeast. Residents of the city are known as "Wentworthians". As of October 2018, Wentworth's metropolitan population is estimated to be 5,235,206.

The city, colloquially referred to as "Wenno" by locals, has been permanently inhabited since the 15th century as a trading port. It was officially established as Wentworth on 31 August 1718, named after local merchant and explorer Sir Thomas Wentworth. The population of the town steadily increased throughout the 19th century, with a gold rush and andesite mining boom helping to transform Wentworth from a small port town to a major global and cultural economic centre. After World War II, it experienced mass migration and became one of the most multicultural cities in the world.

Wentworth has an advanced market economy with strengths in the industries of tourism, finance and manufacturing. It is classified as a world city and is one of the world's most liveable and expensive cities. Wentworth is home to one of the world's most developed public transport systems, including the Wentworth Metro and integrated bus, light rail and monorail systems, with a record-high ridership for a city its size.

Wentworth has hosted major international events such as Expo 96, and will host the 2024 Summer Olympics. The city is among the most visited cities in the world, with millions of tourists coming each year to see the city's landmarks. Boasting over 1,000,000 ha (2,500,000 acres) of nature reserves and parks, its notable natural features include Castlebrook Bay, Whetstone National Park and Hyde Park, the oldest parkland in the country. Built attractions such as the Bayswater Bridge and the EN Tower are also well known to international visitors. The main passenger airport serving the metropolitan area is Wentworth Bexley International Airport, Enderron's busiest airport.

Wentworth is named after explorer Sir Thomas Wentworth. Prior to 1718 it was known as Castlebrook, which lends its name to Castlebrook Bay to this day.

There exist two names each for Chinese and Japanese, known as the "traditional" and "modern" names. The traditional form is 温湾 (Pinyin: Wēnwān, Hepburn: Onwan), literally meaning "warm bay", while the modern form is 温特沃 (Wēntèwò) in Chinese and ウェントワース (Wentowāsu) in Japanese, being much closer to the English pronunciation of "Wentworth". 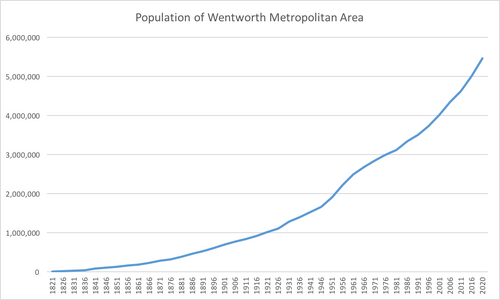 Wentworth is one of the most multicultural and diverse cities in the world.

Wentworth has a semi-presidential political system, with the Governor of Wentworth (currently Matthew Yang, an independent) as the head of state, and the Chief Governor of Wentworth (currently Jennifer Armstrong of the Social Democratic Party) as the head of government. Its unicameral parliament consists of the 91-member Wentworth Metropolitan Assembly, with elections held every four years, using full preferential voting.

Wentworth elects 25 Members of Parliament to the Enderronian Parliament.

Historically, Wentworth was considered a bastion of social liberalism and progressivism. Today, the city is split politically, largely along class lines, with the working class suburbs voting for the Social Democrats and the wealthier areas voting for the Liberal Party. Since the early 2000s, the Greens have become an increasingly powerful force, especially in the CBD and surrounds. The Social Democrats are strongest in the city's central core, western suburbs and the industrial northeast, while the Liberals are strongest in the North Shore and the eastern suburbs.

At the city level, Wentworth has a historical tradition of divided government and cohabitation. Wentworth has had a Governor and Chief Minister from the same party for only 20 of the 48 years since the city became self-governing in 1972, the lowest number across Enderron.

Community content is available under CC-BY-SA unless otherwise noted.
Advertisement